Horta is one of the great ocean crossroads of the world. Ever since people started voyaging in small boats, they have been coming here.

And now I’ve made it. It does feel as if I should have been here before – indeed, one of the first things I did was go and look for the name of my old boat on the harbour wall.  Largo came here in 1988 while being delivered back to the UK after the Singlehanded Transatlantic Race (I had to return on a plane from Boston to go back to work – that’s not going to happen again…)

In fact, it turns out that Largo’s name has been painted over.

This is hardly surprising since it is considered back luck for any Sailor to leave Horta without painting on the harbour wall – and there is a limit to even the biggest harbour wall, which is why they have progressed to the quay itself, the fuelling berth, the shower block – in fact just anywhere with a flat surface. It has created one of the great wonders of the cruising world: Thousands upon thousands of paintings – everything from a simple scrawl with a name and date to some real works of art. And what is so moving is the stories that so obviously lie behind them – five and ten-year circumnavigations are commonplace. Children appear between the first visit and the second…generations of families come back sailing the same boat…

Obviously, Samsara had to make her mark – although, since she has six Atlantic crossings to her name that I happen to know about, it is most likely some are listed somewhere here already – if only I could find them.

Anyway, I identified the perfect place for the new one – where it would be seen by passers-by on the pavement as well as yotties in the marina. This was particularly good news because I don’t mind admitting that I could see an opportunity here for a little tasteful advertising…

Since publishing my YouTube video just two weeks ago, I have had five people sign up for regular supplies of the health supplement which I credit with keeping me going into my eight decade – and all without any of the sort of ailments with usually afflict people of my age.

So, I spent much of today sprawled on the ground painstakingly painting a cartoon of an old man alongside the words: “OldManSailing.com – Because ageing is a lifestyle choice. Just say No! Samsara 2018”

… with lots of room to add the dates of future visits.

Here’s a tip, if you ever want to do this: Don’t buy cheap paint brushes. I got mine from B&Q before I left home and by the time I had finished, my painting looked like something out of the reception class at my children’s old primary school.

This meant I had to go back, time and again, with better brushes, touching up the mess. It drew a certain amount of attention from those passers-by whose attention I had intended to attract in the first place – it’s just that I wished they would wait until I had finished.

Some were accompanied by a guide who insisted on interviewing me – and one, shepherding a party from Germany, performed to type by asking: “And how do you know you are allowed to paint here?”

Trying not to roll my eyes, I pointed to many thousands of other paintings stretching in both directions and explained patiently that sailors had been painting on these walls for at least 50 years and I was sure that if the authorities objected, they would have done so before now. It was only afterwards that I wondered if anybody had asked permission to paint on the Berlin wall.

A French woman came by and wanted to photograph me with my finished work. She said she would send me the photo.

It was only after this, when I had begun to think about a photo that I took a really close look at what I had done and realised I had left the first “e” out of “lifestyle”.

So that was it, wasn’t it? I got out the big brush and painted over the whole thing. Now I’m going to have to do it all again tomorrow.

Feeling as if I needed some sort of restorative, I took myself off to the Café Sport while the paint dried. You can look up the Café Sport in Horta – it’s an institution. Now in the hands of the grandson of its founder and having grown from one café to an entire street with a restaurant, a whale-watching business, a clothes shop selling all things “Café Sport”, a scrimshaw museum (art on whalebone), not to mention an ice cream stall, a beer terrace and even its own gin.  Café Sport is the definitive lesson on how to build a successful business from a single idea.

Sure enough, I took my beer across the road to take yet another picture of sunset on Pico’s volcano (every time you see it, there seems to be something more dramatic about the way the light catches the clouds). While doing so I fell into conversation with a couple from Quebec who had sailed a boat even smaller than mine from New York. We discussed refrigeration and baking bread, lightning protection and astro-navigation – and it turns out we are moored on the same pontoon, just three berths away from each other. We will meet up again tomorrow.

Then on Saturday I plan to set off back to the UK and they will cruise the islands before making their way to the Canaries before winter comes to the Azores – which it does with a vengeance. 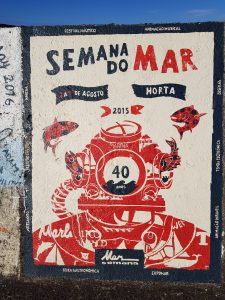 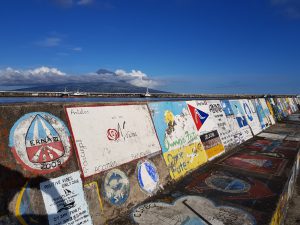 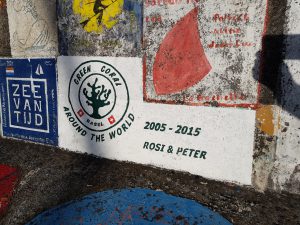 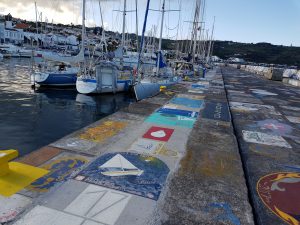 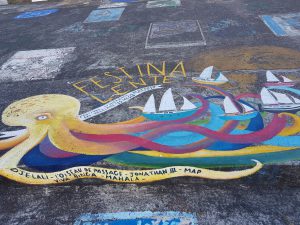 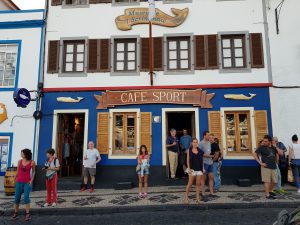 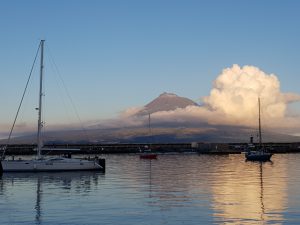