You expect some things to change in 30 years – it’s just a surprise when they do.

The last time I visited Vila Island off Vila do Campo on Sao Miguel in the Azores was in 1987. With a couple of other competitors in the Azores and Back Race from Falmouth, we took somebody’s boat the ten miles down the coast from Ponta Delgado and had a picnic in this crater of an extinct volcano.

I remembered it as an amazing place – you had to anchor outside and then take the dinghy through an entrance no more than ten feet wide into a perfectly circular lagoon. There was nobody else there, the water was warm and clear – quite simply it was like something out of this world.

So, obviously when the family flew out for a week to join me in Ponta Delgado, I was determined to show it to them.

We sailed – the five of us, which seemed quite crowded aboard Samsara – the two hours along the coast and there, just as I remembered it was the island.

…except it was not as I remembered. For a start there was a quay where excursion boats tied up to disgorge parties of tourists – and they’d built a breeze-block shack for the lifeguards (there are lots of lifeguards in the Azores now). Well, that can’t be a bad thing – and obviously there’s no reason why tourists shouldn’t see this wonder of nature…

Actually, that is part of the problem. The island is now a nature reserve and, after making two trips in my very small dinghy to drop my passengers, a lifeguard rushed over waving his arms and blowing his whistle to tell me that I could not enter the lagoon with a motor even if I wasn’t using it. After a bit of shouted negotiation, it was agreed that if I took the motor back to the yacht, I could row into the lagoon and haul the dinghy up onto the rocks.

Unfortunately, by the time I had gone to all the trouble of doing this, the lifeguard had spoken to his boss and, if I wanted to land and join my family for a swim, there were only two ways I could do it: Either (a}: Go into the local harbour and hire a kayak (which of course would mean I couldn’t take anyone else with me) or (b): Take everyone back to the yacht and pay to moor in the local harbour, then buy five tickets for the excursion boat.

In the end I returned to Samsara and sat in the sun reading a book until summoned by mobile phone to pick up the shore party – after all, I’d seen this place once already.

It was only later, talking to the owner of our Airbnb apartment that one other piece of the jigsaw puzzle fell into place: Vila Island is now a nature reserve and visitors are limited to 400 a day – which means that in high season like now you have to book several days ahead.

I suppose we should consider it a small victory that on this particular day, there were 404 visitors. 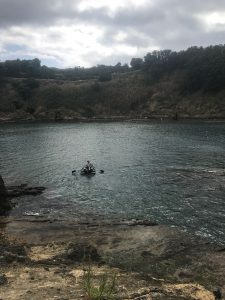