Tell me if I’m being patronising.

The other day, I wrote about the desperate situation for people in The Gambia – the economy on the floor, everyone scrabbling for just the basics of life – and how I felt obliged to take on all manner of guides and interpreters and pay over the odds.

Here’s something else: one evening, I anchored at Kuntaur, 133 miles up the river. This is where you stop to visit the ancient standing stones at Wassu. Inevitably a small canoe appeared alongside with a couple of lads offering their services. By this time, I knew better than to refuse – I’d only get hassled by another pair.

Of course, the following morning, four of them turned up. They were called Badou, Bilali, Del and Ibraima. Together, we set off on the dirt road for Wassu. 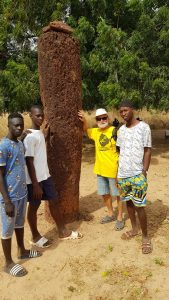 It was a fair old walk on a hot day, but they showed me the shortcut and pumped water so I could drink from the village well. We got to talking: they were all between 18 and 20, and not one of them had ever had a job. They just hung about the waterfront, hoping for someone like me to turn up.

To stoke the sympathy a little further, they got Ibraima to take off his scarf. In these days of COVID, it hadn’t occurred to me to wonder why a young man would wear a scarf around his face. The reason was because he had been standing over a petrol generator when it exploded – and no-one at the local hospital had heard about skin grafts. Maybe if I took a picture, someone in England would help…

Believe me, you don’t want to see that picture.

But it did move the conversation on to their situation, and before I had thought it through properly, I said something like this: “Look at it this way: you’re four your men who ought to be working. Working gives you self-respect. Working gives you a reason to get up in the morning. Your problem is that nobody wants to give you a job.

“But that doesn’t prevent you from working. Even if you don’t get paid, having to get up in the morning and go to work – relaxing at the end of the day after a job well done – that’s a good feeling for a young man to have.

“So how about this: Find your own work.”

At this point, they reminded me there was no work – none, nada, niente – or, as they say in Wolof dara.

“But look around you,” I told them. “Everywhere there is rubbish – garbage.”

And it was true. The whole country is one enormous rubbish dump – for a very obvious reason: if your first priority is finding enough to eat and the second is getting a roof over your head before the rains come, the little matter of putting a plastic bottle in a litter bin comes way down the list.

That’s if there are any litter bins… 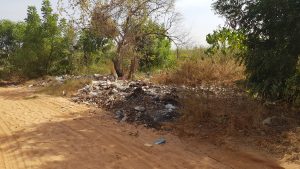 Rubbish everywhere in a country where clearing up is not the top priority.

So here was a suggestion: “Get up every morning, the four of you, six days a week and clear up the village. Collect the rubbish and take it out into the bush, and burn it. What won’t burn, you can bury.

“Of course, nobody will pay you for doing it. Probably, nobody will thank you for doing it. But I can promise you this: after a while – a month, a year – whatever it may be, somebody will give you their empty plastic bottle instead of throwing it on the ground. They will ask if you wouldn’t mind taking it away and burning it.

Then some more people will do the same and – since you’re still busy clearing up – gradually the streets will start to look better. People will notice this. You will feel a sense of pride. The town will thank you for it – trust me, if you keep on clearing up, people will appreciate living in a place that doesn’t look like a tip.

“And here’s the thing: People in the next village will get to hear about you – and the local town. Heaven’s above, you might even end up on television.

“And one day – it might be a year, it might be five years – along will come an entrepreneur – somebody who owns a business, or maybe many businesses, and they will be looking for four new employees. Will they give those jobs to four young men who have never worked but just hang around the waterfront – or will they give them to the four who decided to make something of themselves and cleaned up their village and earned the respect of their community?

It was a difficult concept to take in, walking along a dirt road under the hot sun, heading for a bunch of stones people had put up 1,400 years ago – all in the hope that the old foreigner might give them a handful of grubby notes.

I plunged on: “Here’s something else. You want to be rich, right? Here’s how to get rich. It’s easy – but that doesn’t mean everybody’s going to do it.

“Here’s what you have to do: the first week your boss pays you, take 10% of that money (they understood percentages) and put that 10% in a secret place. Do the same next time you get paid – in fact, every time you have some money coming in after that, 10% goes in the secret place.

“When there’s enough, you put it in the bank – earn a bit of interest. One day you’ll have enough to invest it in something – maybe start your own business. But whatever happens, you keep adding 10% every time you have money coming in.”

“At that point, you can call yourself rich, and you won’t need to work anymore.

“You can hang around the waterfront.”

All this happened in the week before Christmas. On Christmas day, I was invited to lunch with the crews of two other boats – all of them retired. I told the story of the four lads who took me to the stones and the advice I had given them and asked whether I had been patronising (other people’s feelings not being my strong point).

But, “Oh no,” they said. It was good advice. Besides, I am an old man, and in the Gambia, the old are respected. Maybe it would make all the difference. Maybe this one small germ of an idea would change the course of four young lives. It was a lovely thought.

Of course, it would be better if they had a mentor. Otherwise, how long would they keep at it – that’s if they got started at all.

But, on the other hand, we’re all on WhatsApp.

11 Responses to The lads